In this post we will look at Swagger Interview questions. Examples are provided with explanations.

Swagger is used in sharing documentation in the products, managers, testers and developers and also is used by vatious tools in automating API Related processes.It is also used in developing APIs through OpenAPI Specification(OAS), also consists of open source and professional tools.
Swagger also helps in describing the structure of our APIs for reading by the machines.It does it by asking our API return YAML or JSON which contains deatiled discription of our API. 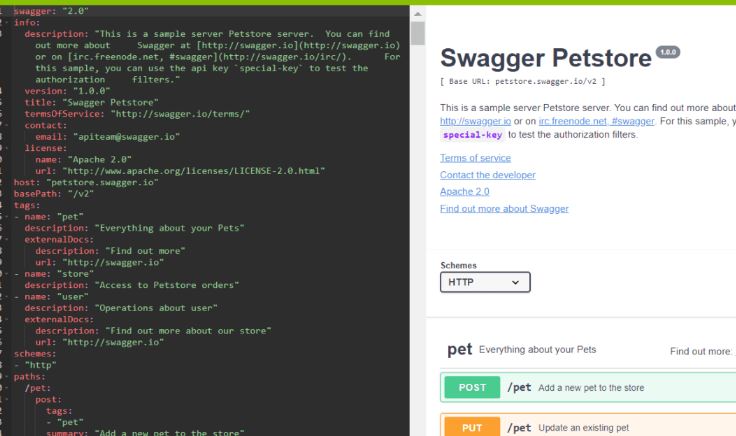 What are the features provided by Swagger?


What is API Testing?

API Testing helps in analyzing Application Program Interface in verifying its functionality, security, performance and reliability.It is performed by requesting it to one or more API Endpoints and also in comparing the response with the results.API Testing performs with critical layes such as Business, and in business logic processing it is carried out and all Transactions through the User Interface and Database Layers.

What are the Benefits of API testing?

Benefits of API Testing are as follows:

What are the types of API testing?

What are the protocols used in API Testing?

What is Swagger Editor?

Swagger Editor is used in designing, defining and documenting RESTful APIs in Swagger Specification.It also helps in bringing the Swagger Editor, UI, Codegen Tools in cloud as an integrated API Design and Documentations which is built for API Teams working with OpenAPI Specification.

How can we Add API in Swagger?

We can add API in Swagger by using the following command:

OpenAPI is an API description format for REST APIs and also allows us in describing our entire APIsuch as Available Endpoints and Operations on each endpoint operations parameters like Input and Output for each operation.

How can we send custom headers with requests in Swagger UI?

We can send custom headers by using the following command:


How should we generate static docs with swagger?

We can generate static documents by using the swagger codegen command:


How to define an enum in OpenAPI?

We can define an Enum in OpenAPI 2.0 by using the following command: