In the previous post we saw how to perform basic operations in Elasticsearch. In this post we understand the Elasticsearch Cluster, Node, Index and Document using example.

For this tutorial you will need to install elasticsearch head plugin. Follow the steps mentioned in Elasticsearch Head Plugin installation
Start the elasticsearch and go to http://localhost:9200/_plugin/head/

Currently we have not indexed any data so no nodes are shown.
We will create a new index and insert a record.

Next we configure the cluster name and node name. For this go to elasticsearch/config folder and modify the elasticsearch.yml as follows- Restart the elasticsearch, insert the above record again and go to url http://localhost:9200/_plugin/head/

So a cluster named cluster has been created with a single node named node. By default the elastic search creates 5 primary shards and 5 replica shards. But a single node can by default hold only 5 shards so the 5 replica shards could not be created and so they are shown as unassigned. Due to this the cluster health is shown as yellow. The cluster health rule is as follows-
Next without closing this instance of elasticsearch, start another elastic search in a similar way.
So now we will have two nodes in the cluster. So the 10 shards(5 primary and 5 replicas) can now be distributed among these nodes. So the health of the cluster will now be green.

We can see here that all the primary shards are in one node and the replica shards in another. Lets now have a look at the theoretical definitions- 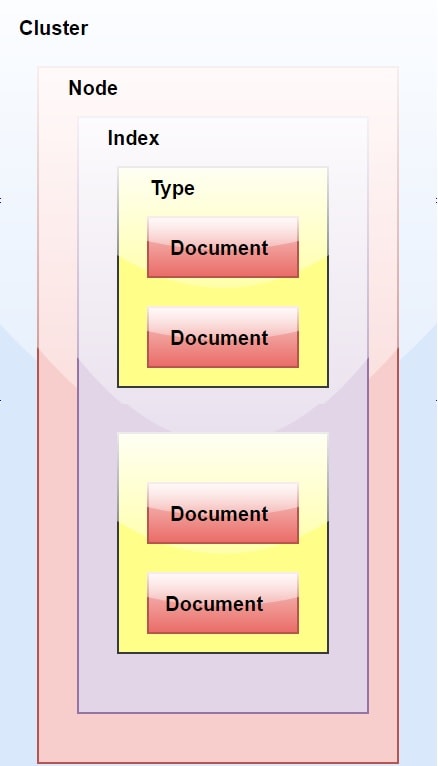